Skip to content
Posted by By Tim Seiter July 16, 2021Posted inKarankawasNo Comments
In my most recent article, “The Karankawa-Spanish War from 1778 to 1789: Attempted Genocide and Karankawa Power,” I prominently feature two Karankawa individuals: Joseph María and Manuel Alegre. In the…

Posted by By Tim Seiter July 16, 2021Posted inKarankawasNo Comments
The editors at the Handbook of Texas kindly provided me the opportunity to revise their entry on "Karankawa Indians." While sharing all my edits is a bit cumbersome, the most…

Southwestern Historical Quarterly has published my latest article on the Karankawa-Spanish War. The following is an abstract:

This article is a narrative history of the little-known Karankawa-Spanish War. It has two primary purposes. The first is to uncover and name the actions attempted by the Spaniards against the Karankawas as genocidal by documenting three major attempts of annihilation led by Athanase de Mézières, Domingo Cabello y Robles, and Nicholas de La Mathe. The second purpose is to show how this attempted annihilation acted as a mechanism for various Karankawa tribes to consolidate into a more unified body. In the process of achieving these goals, this piece also demonstrates how Native Americans familiar with the Spaniards’ customs and language acquired advantages for themselves and their tribe and how shipwrecks served as a means of bypassing typical webs of trade for the Karankawas.

For a full version, visit the Texas State Historical Association.

If you are unable to access the article through TSHA please reach out to me personally.

In 1684, the famed explorer René-Robert Cavelier, Sieur de La Salle embarked from France to establish a military settlement on the lower reaches of the Mississippi River.[1] Roughly two hundred and eighty souls on four vessels accompanied La Salle—only a handful would survive the expedition.

From a present-day perspective, the voyage began poorly. Illness struck fifty men with two dying. Spanish corsairs captured the colonizers’ supply ketch, limiting the expedition’s supplies. And La Salle and the fleet captain continually clashed, sowing discord among the sailors and the colonizers. Despite these hardships, officers on the ship exclaimed that “it had been a long time since they had such a fortuitous crossing,” a testament to the usual hazards of a trans-Atlantic voyage in the seventeenth-century.[2]

After two months of overseas travel, the colonists temporarily landed at the port town of Petit Goâve in Saint Domingue (Haiti) to resupply. While at Petit Goâve, locals persuaded six of La Salle’s colonists to desert the expedition by listing dangers awaiting them on the voyage to the mystical Mississippi: keel-crushing reefs, relentless Spanish fleets, blinding winds, mountains of fog, and most fearfully, “miserable savages who live on roots.”[3]

This article is a history of the historical works about the Karankawa Indians of the Texas Gulf Coast. Recently, the Karankawas’ image in the historical record has improved greatly, but I argue there is still an immense amount of work to do. Scholars need to better integrate Karankawa historical actors into their work. Authors need to start their histories of Native Peoples prior to European contact. And finally, Karankawas are alive today—the writing of their history requires their voice.

To keep the post manageable, I only touch on a handful of secondary works related to the Karankawas.

There exists a multitude of eminent Karankawa men and women in history: Mateo, Jose Luis María, Manuel Alegre, Prudencia, Llano Grande, the daughter of Big Chief, to name a few. In past writings about these coastal Indians, authors often neglect to highlight these Natives.

In 1719, off the coast of Galveston, the French Maréchal d’Estrées ran aground due to the negligence of her captain: Gervais de La Gaudelle. On deck, the sailors and the first mate milled around contemplating their hopeless situation. Gaudelle retreated to his cabin, locking himself away.

A day passed, and through the door of the captain’s quarters, the mate asked for Gaudelle’s plan. The captain replied, “that they could do what they wanted.”[1] Hearing this, the first mate resolutely gathered all the sailors on deck and ran from one side of the ship to the other in an effort to dislodge the craft from the silty Gulf mud.[2] To aid in their efforts, the sailors unfurled the sails and with a strong seaward wind, the grounded ship careened free.

Back at sea, Simars de Bellisle, a twenty-four-year-old officer, four other men of the same rank, and two pilots met in secret.[3] The ineptitude of their captain, the lack of potable water, and an illness spreading through the ship worried them greatly.[4] Therefore, the clandestine body decided to send de Bellisle and the four other officers (Alain, Courbet, Duclos, and Legendre) to shore and have them walk to Ship Island for help.[5] They believed Ship Island was locatd only a few dozen miles away, not three hundred and fifty.[6]

When the 1526 Panfilo de Narváez expedition devolved into desperation in modern-day Florida, the conquistadors decided to build five make-shift rafts in an attempt to make their way to a possible source of salvation—Pánuco, Mexico. They believed Pánuco to only be a week or so away. In actuality, the settlement was over a thousand miles distant.

In 1528, the Narváez expedition launched their rag-tag fleet of rafts on the Bay of Horses, so named because every third day while constructing their boats the Spaniards slaughtered a horse for food. All five rafts began to drift west, and all ultimately crash-landed on the coast of Texas. Exactly where on the Texas coast has been a point of contention for the past hundred years. This week Taylor Ferguson and I took pictures of where I believe Álvar Núñez Cabeza de Vaca’s raft landed: not on Galveston Island as many think but instead on Follets Island to the south. 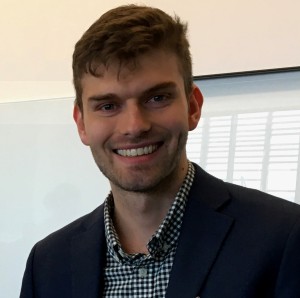 Howdy, I am Tim Seiter, a third-year Ph.D. student in the Clements Department of History at Southern Methodist University. I study colonial Texas and am currently finishing my book, Wrangling Pelicans, which describes life as a presidial soldier in eighteenth-century Spanish Texas. For more on my publications, feel free to follow me on Twitter.