In 1719, off the coast of Galveston, the French Maréchal d’Estrées ran aground due to the negligence of her captain: Gervais de La Gaudelle. On deck, the sailors and the first mate milled around contemplating their hopeless situation. Gaudelle retreated to his cabin, locking himself away.

A day passed, and through the door of the captain’s quarters, the mate asked for Gaudelle’s plan. The captain replied, “that they could do what they wanted.”[1] Hearing this, the first mate resolutely gathered all the sailors on deck and ran from one side of the ship to the other in an effort to dislodge the craft from the silty Gulf mud.[2] To aid in their efforts, the sailors unfurled the sails and with a strong seaward wind, the grounded ship careened free.

Back at sea, Simars de Bellisle, a twenty-four-year-old officer, four other men of the same rank, and two pilots met in secret.[3] The ineptitude of their captain, the lack of potable water, and an illness spreading through the ship worried them greatly.[4] Therefore, the clandestine body decided to send de Bellisle and the four other officers (Alain, Courbet, Duclos, and Legendre) to shore and have them walk to Ship Island for help.[5] They believed Ship Island was locatd only a few dozen miles away, not three hundred and fifty.[6]

Unsurprisingly, Gaudelle had no qualms sending five potentially mutinous men off his vessel; he loaned the five officers a shallop, and with about half a week’s worth of food and shot, Simars de Bellisle and his companions landed on a coast that they became acquainted with in the worst of ways.

The first day ashore, the small party acquired the lay of the land and camped without significant movement. When the self-volunteered castaways awoke the next morning, the Maréchal d’Estrées had disappeared from sight.[7] Abandoned, the men began their trek east. After five days of walking and with rations running low, de Bellisle writes that the group “came to a place submerged, and where the mud was to [their] necks.”[8] The marooned men, as historian Henri Folmer speculates, had stumbled upon the mouth of the Sabine.[9] All too often conquistadors and colonizers, fretting over the massive distance and fickle weather of Texas, found a more dangerous and confounding obstacle in her rivers.

Their path blocked, the men turned inland in search of a European presence. They did so in vain. Starvation and the downright hellish environment took its toll on Corbet first. A day later, the castaways found Legendre unable to wake from his sleep. The remaining officers: Duclos, Alain, and de Bellisle headed back toward the Gulf of Mexico accompanied by sorrow and sickness. When the thinned party reached Galveston Bay, they arrived at the same spot where they initially made landfall more than a month ago. 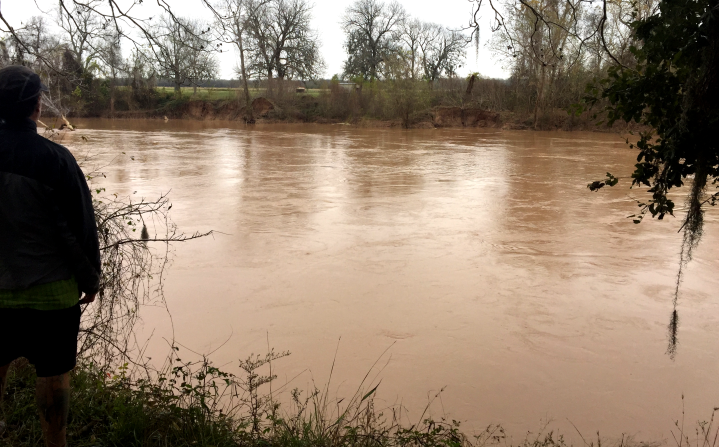 Finding an abundance of oysters, the stranded Frenchmen stayed in the area for ten days. De Bellisle, the healthiest, resolved to press his luck alone by trekking west toward New Spain in search of rescue.[10] After five days of walking he encountered the Brazos, and unable to cross, de Bellisle gave up on his westward attempt and returned to his companions.

“I saw very clearly something red,” relates de Bellisle, “this struck me forcibly and I did not doubt that it was my comrade who had died…I touched him and found him stiff and smelling very bad. I quickly dug a hole and buried him.”[11] Finding Alain dead, de Bellisle held out hope of Duclos’s survival. Instead, de Bellisle found Duclos’s corpse. It was still warm.

They took immediately everything…which consisted of our rifles, our swords, our silver forks and knives, my coat, and a few other things….when that was done they began to take my stockings off, my breeches, my coat, my shirt and my hat, and finally left me as naked as my hand. They had collected on this island more than five hundred eggs. They cooked some. They offered me some. I ate as long as I was hungry.[13]

After being rescued (in exchange for his valuables), de Bellisle traveled throughout the summer with the Akokisas in search of food. By winter, de Bellisle’s uselessness in hunting had become overwhelmingly apparent. At the height of the season where food-certainty was the most unreliable, de Bellisle consumed more resources than he contributed. Accordingly, the guest-host relationship that existed between the Frenchman and the First People slowly became one of captive-captor.[14]  De Bellisle, describing the transition, writes the following:

They began to treat me worse than before. If they needed water or wood they ordered me to go and get it. In the beginning I told them to go and get it themselves because I knew a little of their language. When I told them this the second time, there was one who gave me a blow with all his force. I understood then that I should obey without replying.

This is part one of three exploring Francois Simars de Bellisle’s experiences on the Gulf Coast. A frankensteined section of my honors thesis, this series will analyze the validity of de Bellisle’s Relation and his testimony of the Akokisas’ cannibalism. Part two is due out at the end of January.

[5] –  When the five officers reached Ship Island, they intended to return and rescue the two pilots aboard the Maréchal d’Estrées who personally believed they “would certainly perish [otherwise].” Folmer, “De Bellisle on the Texas Coast,” 209. The French officers agreed to “light three fires every evening,” assumedly so the ship could track their position, see Folmer, “De Bellisle on the Texas Coast,” 209. The officers expected to encounter Native Americans that could lead them to a French settlement, see Jean-Baptiste Bérnard de La Harpe, The Historical Journal of the establishment of the French in Louisiana, 111. Nevertheless, the Frenchmen proposed a dangerous plan, as historian Robert Weddle aptly summarizes, “their qualifications for wilderness survival were even less than La Gaudelle’s as a ship captain.” Robert Weddle, The French Thorn (College Station: Texas A&M University Press, 1991), 213.

Frank Wagner, the editor and translator of Jean Béranger’s journal, writes that “MM. de Belisle, Legendre, Duclos, Allard, and Corbet, went ashore with plans for a week of hunting, preferring the sport to the risk of contagion shipboard,” see Jean Béranger, Béranger’s Discovery of Aransas Pass, trans. William M. Carroll, ed. Frank Wagner (Corpus Christi: The Friends of the Corpus Christi Museum, 1983), 10. Wagner received this information from Jean-Bernard Bossu’s Travels in the Interior of North America, of which is filled with errors, exaggerations, and aberrantations that will be discussed later in this chapter, see page BLANK.

[8] –  Folmer, “De Bellisle on the Texas Coast,” 210. Captain Beranger makes a mysterious comment that the officers stranded on the Texas coast met an “Englishman from Jamaica,” who directed them toward Louisiana. The Englishman does not appear in any other retelling of de Bellisle’s account, see Jean Béranger, Béranger’s Discovery of Aransas Pass, 29.

[10] –  Alain initially accompanied de Bellisle on this westward trek, but exhaustion took its toll and Alain turned back to join Duclos, see Folmer, “De Bellisle on the Texas Coast,” 213-214.

[12] – Mrs. Oliver, who interacted with composite Indian groups on her father’s ranch records “at certain times in the year [these groups] obtained quantities of sea-birds’ eggs of many different kinds of which they were very fond,” see Albert Gatschet, The Karankawa Indians: The Coast People of Texas (Cambridge, Massachusetts: Peabody Museum of American Archaeology and Ethnology, 1891) 12.

[14] – Sentence structure and idea from Andrés Reséndez: “what had begun as a guest-host relationship between natives and the Spaniards eventually degenerated into a relationship between masters and slaves.” In this quote, Reséndez is referencing Cabeza de Vaca but the idea is relevant with Simars de Bellisle, see Andrés Reséndez, A Land So Strange: The Epic Journey of Cabeza de Vaca (New York: Basic Books, 2007), 143.

Tim Seiter
Howdy, I am Tim Seiter, a third-year Ph.D. student in the Clements Department of History at Southern Methodist University. I study colonial Texas and am currently finishing my book, Wrangling Pelicans, which describes life as a presidial soldier in eighteenth-century Spanish Texas. For more on my publications, follow me on Twitter @Seiter_Tim.
View All Posts